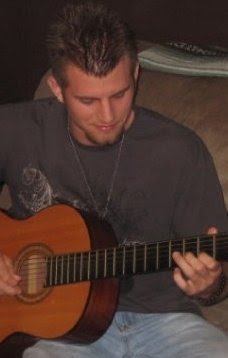 One of the best things about my military days was having wonderful friends and coworkers. When your family is thousands of miles away, you lean heavily on your friends. Living in the dorms, I had a lot of friends. We were all accustomed to leaving our doors and windows wide open, and whoever wanted to visit just showed up. I spent a good bit of time sitting outside of my friend Mac's room, listening to him play his guitar, or swing dancing with him to southern rock. Mac worked in my shop, Liquid Fuels. Thanks to his spontainiousness, work was never dull. We always found something interesting to do... even when chipping rust off a tank and putting a fresh coat of paint over it.
Mac is from Tennessee, with the redneck attitude and accent to prove it. He's all about living life to it's fullest. We had plenty of dorm parties, and even a run in with the base cops in which Mac fled the scene... in a bathrobe... 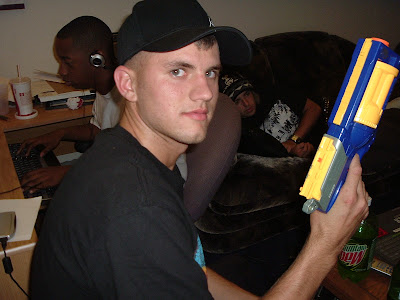 We would go mudding on weekends, and camp on the beach, and of course, would drink ourselves silly. I was the only female to drive Mac's truck, since he was so drunk he couldn't even open the door without thinking there was mashed potatoes in the keyhole... 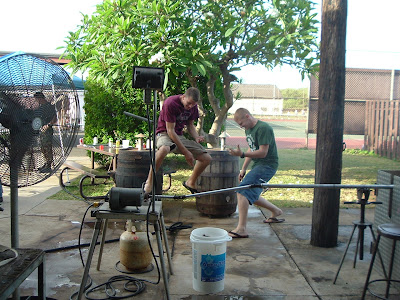 The guys I would hang out with never treated me as a girl. I was just one of them, with a ponytail, and could kick butt right alongside them. So it was a huge shocker when it was announced I was pregnant. I became fragile. I hated it. Suddenly, I wasn't allowed out on job sites. I missed getting to clean tanks with the guys, and my shop responsibility became book work.
As mentioned in a previous post, Mac was there for me in one of the scariest times of my life. He helped get me to the hospital (even if we did get lost along the way), and held my hand as my daughter was born. He's a very special friend! 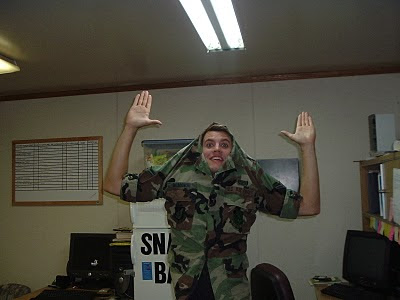 Last week when my daughter pulled his name from the bucket, I e-mailed Mac with some questions. Here is what he said.


Q&A
Mac, what have you been doing since we last talked?
I've been out processing the military, and by the time you get this I'll be out and a free man.

What are some of your fondest memories of time we spent hanging out?
Working together and all the parties we went to. I'll never forget your art and how passionate you are about it. I remember how you and Clay laughed at me when I wrote signal wrong. HaHa, those where good times.

What is one of your craziest memories of time we spent hanging out?
When SSgt. Stevenson told us you we're pregnat. It was a shock to all of us. Who could also forget when I had to take you to the hospital and deliver your baby. Remember I got lost on the way over there, and the look on your face when they told you they where going to induece you was pricless.

What are your favorite hobbies these days?
Drinking beer and playing my guitar.

Where you surprised I put you in my favorite people can?
Yes, it was a surprise.

And so ends my first Thuper Thursday with my good friend Mac, who truly is Thuper Dooper!
Ta!
A.McBay
Posted by Unknown at 10:40 AM