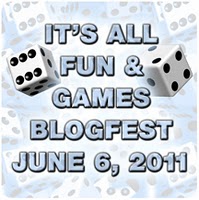 Finally! A blogfest I feel comfortable participating in. This one is called It's All Fun & Games Blogfest hosted by Alex J Cavanaugh and I am to list three of my favorite games and why.
So let's get this nerdy party started!
When I was a little girl a friend of my dad's gave me a Nintendo (the old ones that you had to blow in the cartridge when it wouldn’t work) and some games. My favorite of course was Mario. I played the game for hours until I got frustrated at dying and went outside to go about my tomboy ways.
When I got older I got my first gameboy (the brick that ate batteries for breakfast.)  Again I started with Mario, but soon became obssessed with Pokemon. Yes, I said it. I'm a poke geek. I still am. I don't know what it is about those cute little pets, but I have played nearly every version that has come out.
﻿
﻿

Saving the best for last, Final Fantasy XI, an MMORPG, is my absolute favorite. You're probably wondering what gibberish I'm talking. FFXI is an online game. You have a character that you level, and can have several jobs on this character. When leveling you party with other players to beat monsters. As you level you can do missions, and quests, or you can acquire better equipment. I've played off and on for the past nine years, and find that every time I leave the game grows. They are always adding content, so you are never really done. I love this game the most because of my friends.
When I was in the military, my friends and I would play daily. Now I play only to unwind. It helps me to think, to relax, and even helps my writing.
So there ya go. My three favorite games.What are some of your favorite games?