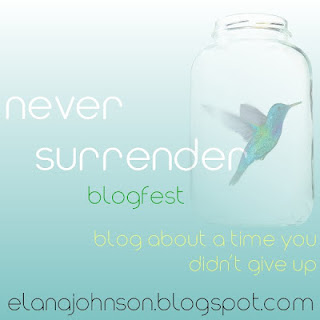 To celebrate Elana Johnson's release of her second book SURRENDER, I wanted to participate in the Never Surrender Blogfest and share a time when I didn't surrender. This book jumped to the top of my reading list! You can pick up POSSESSION and SURRENDER and start reading this fantastic series today!


Basic training wasn't easy for me. I sprained my ankle only a few weeks before, and had a hard time making the run. I wasn't a runner anyway, and running on a sprained ankle was hell. I was also put on Latrine crew (cleaning the bathrooms... ewwwww) and the serving crew at chow time (which meant I was always last to eat and had less than 5 minutes to do so). I spent more time counting down the time until my next meal than how many weeks I had left of training, and was always so hungry! Top that off with TI's that like to get in your face and try to break you down, and a letter from home saying there was a wager on if I would make it. Odds were against me and I'll admit, I shed a couple tears.


Anyone who knows me, knows how stubborn I can be. I come from a long line of stubborn. I used that to push on. While having two TI's yell into each ear that I was no longer daddy's little girl, I kept my mouth shut, my eyes forward, and my head high. They don't know me! I will always be my dad's little girl!


I continued to push myself on the run. Eventually my ankle healed enough that I passed the run time.

Who knew all those years hanging out in the country with my dad had prepared me for obstical courses and camping, or what the girls called hell week (I think I was the only one disappointed to be back at the dorm where there was a latrine to be cleaned.) It was so funny to walk across logs 10 feet off the ground as if I were Catwoman on Gotham rooftops while the others flailed and crawled. Ok, so I enjoyed the misery of the girls I was forced to live with (you would too if you had to clean up after them... girls can be so gross!)


In the end I made it to graduation, and my TI still didn't know my name, which my parents thought was hilarious when they tried shaking her hand, and she asked if had always been her troop.

So even though the odds were against me, I didn't surrender!

What is one of the times you didn't surrender?