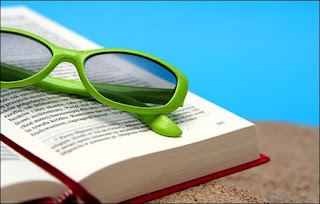 My Hubby shipped me off to Oklahoma for a few weeks to visit with the family. I managed to luck into a day off when my Dad took the kids over night, and I got a whole day off to lounge by the pool and read. Not only did I get a nice tan (no longer Casper the ghost), but I learned something from the book I was reading.
Don't rush revisions and get an editor.
Seriously, I think this book may have been a second draft at best. I had the hardest time reading it. I don't know if it was the typos, the bad sentence structure, or the story inconsistencies. I tried to give the series a second chance by moving on to the next book (it was part of a box set), but after a major inconsistency to the character's traits, I put it down, totally disappointed with the author. She made a big deal in book one about the character loving coffee and coffee shops in the first book, and then in the second book says that she could never stand the stuff.
Know your characters!
I know my characters as well as I know my own children.
Each trait is noted in a character journal, so if I happen to forget their likes and dislikes, I have a list to refer to.
I think if the writer had spent more time and not rushed her books out, she would have caught what I noticed in her rewrites. It makes me wonder if she had anyone else look at it before she published.
I may have spent a long time on my book, but at least when I do finally get it out, it will be polished.
Have you ever read a book that made you think the author should have spent more time editing?
edit Poolside reading revisions write writer