If you are a writer or know any writers, then you have probably heard about NaNoWriMo. It's a fantastic writing challenge where writers commit to writing 50,000 words in just 30 days. Crazy right? Well apparently I'm just that kind of crazy. NaNoWriMo is coming up in November, and I plan to write my little heart out.

Yeah, I know. I've said that the past two years but always dropped out around mid point, but here is why I didn't really make it. I was working a book in a series that I really wasn't able to plan out, because I was still working the first book of that series. Also last year sucked. I mean it. 2013 was the most unlucky year I have ever had, though 2014 is trying her best to do the same.

This year is different. This year I have a plan.

I'll be working on my stand alone adult horror that is currently being called Ghost Mom until I can think up a catchy title. I have spent a lot of time working on an outline that wont leave me hanging. This story has been in my story nuggets file for a while. Another one of my weird and wonderful little dreams.

I hope to attend more write-ins this year, being that I'm close to the Dallas area and there are more writing peeps in the area. For this I wanted to minimize the amount of crap I would have to tote around. My back is in bad enough shape...

A while back I saw that a writer had posted a pic of her on-the-go writing gear. It consisted of an alphasmart, a pen, and a filofax filled with her outline, character sketches, and writing notes. Ever since I have wanted a filofax for that purpose, but refused to buy one because they weren't 'just right' or were expensive (I'm frugal to the max).

Then I found this little beauty at a garage sale for $1. 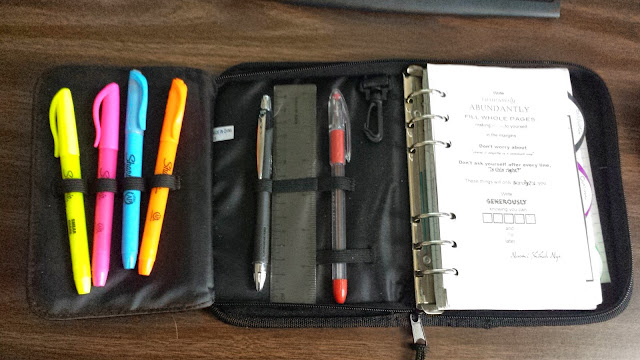 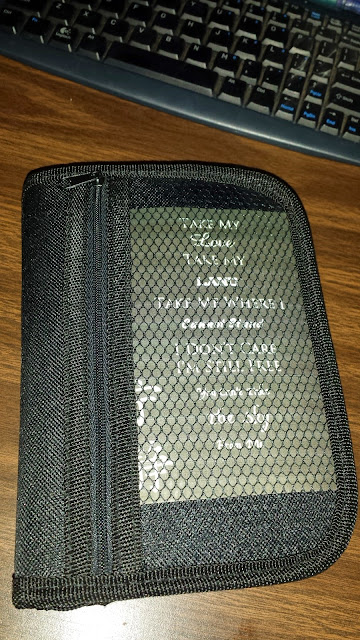 It is just what I was looking for, except for the little Starz logo on the side. But hey! It's cheap and works, so I bought it, and as soon as I got home I went to filling it with note paper. Then I decided to add a calendar so I could keep goals, and word counts and stickers. When I was done with that I added in a few inspirational quotes, some blank sheets for mind mapping, fold outs for Plot Planners, and pens (my best pens). I'm in love. It's like a little writing survival kit! 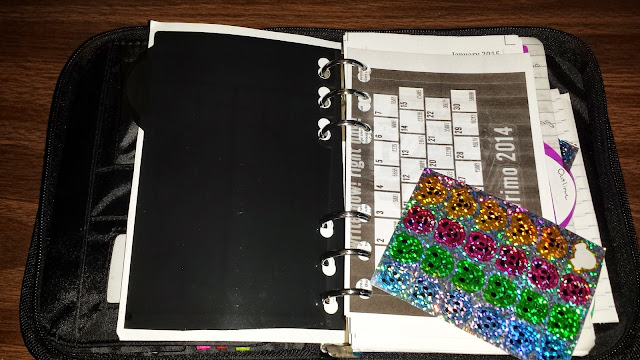 This is is my mobile writers gear for NaNoWriMo. Just toss in a bag and go! 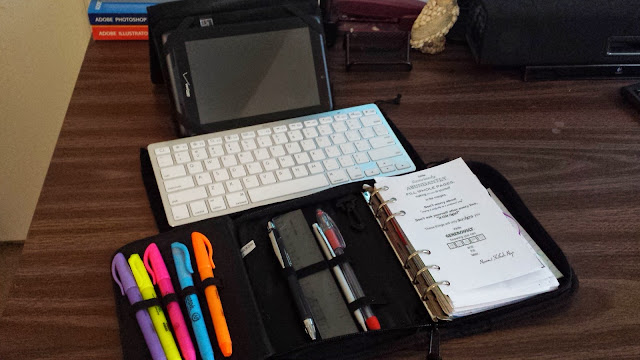 Do you have gear set up for on-the-go writing? What works best for you?

Posted by Unknown at 5:00 AM No comments:

This week I spent a ton of time deciding if I was going to make the move to WordPress. I looked at other blogs, other writers, and statistics. I also did a ton of pricing since I don't have a ton of cash to throw at this venture just yet.

As it is now with the funds I have to put towards the building of my brand, I just can't see spending over a hundred bucks a year on a blog. Right now I pay 10 bucks a year for my blogger domain name through GoDaddy. With it I have my own .com and a professional looking email that I can check through google. I can easily add pages as needed for when I finally get my books out and start selling. Links to the sites where my books can be purchased can be added, so there is really no need for the extra hubbub that WordPress provides.

I did however spend a day redesigning my blog to give it a more mature and professional feel. I'm doing my best to build my brand to best suit my nature. As you can see up top, this included the designing of a new header. Like it?

This branding adventure will include a new blog every week called Fact Friday where I will divulge a new fact about myself each Friday so you can learn more about me. This will start next Friday, so be sure to pop in and check it out!

I hope you enjoy the changes being made here as I continually learn and grow my blog! Thank you for being a part of my life!
Posted by Unknown at 11:39 AM 11 comments:

I'm finding myself stuck with the difficult decision of keeping my old domain at Blogger or moving to WordPress. I have heard several great things about WordPress over the years. Heck I started out on a cheapo WordPress blog page, then moved to blogger, cause that's where all the cool kids were. But now I find myself drawn back to WordPress. Over the years it has grown and flourished, while blogger... well it's not changed at all. Even the Mobile Apps are better suited to a blogger on the go.
I spent some time doing a mock up blog on one of Wordpress's free blogs, and I have to say, it is very tempting.  This temp blog isn't where my permanent blog would be if I were to make the move. Instead, I would just move my domain amymcbay.com over (for a small fee of course). 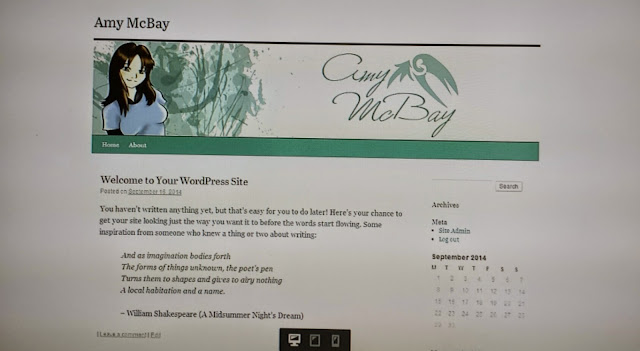 I'm in hopes that the switch would make my blog more visible, look more professional, and encourage me to write more. But it's a tough choice. Do I strike out into the wild unknown, braving the uncertainties of an entirely different platform, or do I stick with whats known and never changing? What would you do if you had the choice?

P.S. I changed the look here. Let me know what you think!
Posted by Unknown at 1:06 PM No comments: