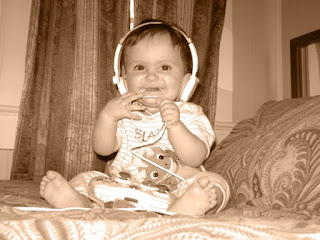 Eight years ago today something happened that changed my life forever. I was young, an adventurist, I was serving my country proudly, and being the best I could. And I was pregnant.


I had just returned from a thanksgiving trip home to Oklahoma from Hawaii and was continuing my day like any other, with a few blood glucose tests and then work in the fuels shop as usual. My people were protective of me and refused to allow me to do anything but sit at a desk. Occasionally I was taken for a car ride around base for some fresh air and sunshine, but then was promptly to my little corner in the break-room where I had been sentenced for the past few months updating all the manuals and books. I was living off base in a shared house with room mates who were seldom home. It was there I returned that day, tired and just a little crampy.

The cramp persisted through the day and on into evening, so I called my Mom to see if I should be concerned. We decided to wait it out and see if it got worse. Shortly after the cramps became much worse, but it was nothing compared to the extreme cramps I deal with on a monthly basis. Still, to be on the safe side I decided to go to the hospital. Tripler, or Cripler as the airmen were fond of calling it, was on the other side of the island, farther than I felt I could manage on my own in my condition, so I call my friends to see if they could take me. After a few people didn't answer, I finally reached Mac. He rushed over in his little pickup, and off we went to the hospital.

I don't know if it was the excitement or just a few wrong turns but we soon found ourselves headed in the wrong direction. It took us nearly thirty minutes to reach the hospital.

Being Tripler is a military hospital ID is required for all persons within the vehicle.

"You may have to fake labor pains for us to get in." he laughed.

By this point I was gripping the 'Oh shit' handle so tight I thought it would come ripping off.

"I don't think I will have to 'fake' anything!"

I could see the panic flare in his eyes.

The guard allowed us through with only my ID, and Mac sped us through the parking lot to the emergency entrance.

"Uh? Can you walk or should I carry you?" He asked opening my door for me.

I walked with him holding onto my elbow, surely afraid I would collapse at any moment.

We signed in at the front desk, and I was promptly ushered into a tiny room while Mac waited in the waiting room. I changed into the drafty paper dress as instructed and was soon introduced to an airman medical personnel, or in other words a male nurse.

Being the modest girl that I am, this made me extremely uncomfortable, but it was not the time to be picky over the gender of my nurse, so I allowed him to examine me. He poked around a bit on my abdominal before propping up my legs and getting a look under the hood.

"Oh SHIT!" He yelled, and darted out of the room leaving me spread eagle on the exam table.

My heart dropped, my stomach clenched, and dread set in. What had he seen? Was my baby OK? Where did he run off to? Should I poke my head out and call for someone?

I was just sitting up and about to barge out of the room and demand an explanation when a woman in scrubs entered and in a calm voice introduced herself as a doctor.

I was told that what her nurse had failed to inform me before dashing out of the room to quickly find a doctor, was that my child was on the way, and that instead of coming headfirst as they should, she was coming feet first. I was then informed that I would be prepped immediately for a c-section.

Great. Here I was on an island away from family, and my babies father was deployed. I had the nurse send for Mac and told him what was happening.

"Don't worry, I'm here." He said, and suited up in a paper outfit usually meant for the fathers.

He called my Mom, who instantly bought a flight from Oklahoma to Hawaii for that night. Then he called our supervisor who insured Daniel would be notified overseas.
It was time.

They rolled me back and put a mask on me to help me breath. I was given an epidural, and laid on a table.

Mac held my hand as they cut open my belly. I couldn't help but laugh, even through the terror I was feeling, at Mac's face as they pulled my daughter out. I doubt the poor guy ever has kids of his own. I have scarred him for life. I couldn't help but feel so grateful to this amazing friend who was standing by my side in one of the scariest situations a woman could experience. 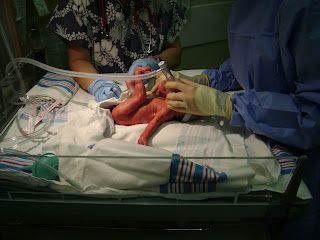 They clipped the cord and rushed my baby to a warming table. It was quiet, and I had only seen a quick glance at her. It wasn't until I heard her start to cry that I started to breath again, and lay back content to let the doctor sew me back up. They afforded me another glance before taking her to the NICU unit, and rolling me down the hall to recovery. 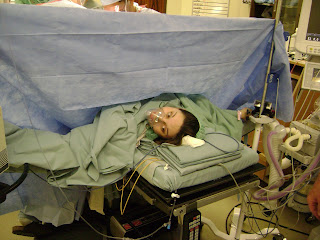 The hall was filled with friends and co-workers, cheering and offering me congratulations.

I wanted to cry, but I was so tired I just smiled as they rolled me away.
As tired as I was, I didn't make for an easy patient that night. Every hour I demanded to be taken to my baby. I wanted to see her, wanted to hold her.

Each time a nurse checked on me I asked and I was told I needed to rest. Later the nurses realized how stubborn a patient I was when I tried to sit up and get out of bed on my own. I didn't care if I had to walk every hall to find her, I was going to see my baby. The nurse brought a wheel chair and wheeled me to the NICU.

I stared in wonder at the tiny baby under the heat lamp. Three pounds, two ounces I was told. She was no bigger than a half a loaf of bread. She had wires connected all over her tiny body, and I couldn't help the tears as I looked at her. Nine weeks early she still needed time to breathe on  her own, and to grow just a little more. She would have to stay in the hospital until her conditions were better. 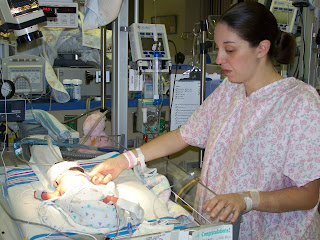 Content she was being well cared for, I allowed my nurse to wheel me back to my room. Passing the other healing mother's with babies in their arms, or sleeping nearby in a little bed, I felt jealous. Like I was missing out on one of my rights as a mother. Look how happy they were, smiling down on their little one, while I had to return with empty arms to a dark room where I was instructed to sleep or they would not take me back to the NICU in the morning.

When I woke I was surrounded with friends. My co-workers had all stopped in to check on me and left behind gifts for my baby girl. Even the commander stopped in to congratulate me and informed me that Daniel had been notified. He shook my hand and left as quickly as he arrived.
I was allowed one more quick trip to my baby's side before being told once again that I needed to rest. 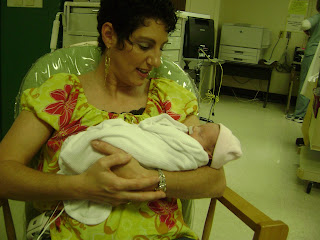 Later that day my Mom arrived. She helped me through the next few weeks. Healing from the c-section was a slow painful process, and I tended to try and do to much for my body to handle. I was pumping milk as best I could in hopes of it helping to make my baby girl stronger so she could come home with me, though my home had quickly become an apartment on base since my roommate suddenly had to leave. Friends and co-workers helped move my things while my mother managed everything. We visited Allyssa three times a day, suffering morning and evening Honolulu traffic, and my mother who had once dreamed of island life, quickly came to understand how I was less than thrilled to be stuck on this particular island. Far too many people, and not enough space. After a month Mom had to return to Oklahoma. I was able to manage on me own, and Allyssa was in good health and on the verge of being released. Not long after, I got to take her home, and I became a parent.

I love to tell people her birth story. I will never forget a single moment of it. It's humorous to me now after eight years, though at the time I often wondered how I would get through it all. With the help of my Mother, and the wonderful friends, more like brothers really, that I made during my time in the military I doubt I could have managed it alone. It was with their help I was able to start the biggest adventure of my life, and my gratitude and love for them is everlasting!