AT&T is run by zombies... change my mind. 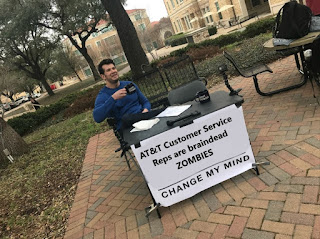 Last week I posted about my stream dreams and aspirations and made mention of my internet woes. After many hours on the phone and in web chat... I am still facing the same troubles.

Oh, my tech guy came out and promptly identified the problem. He was wonderful. Seems our neighbors, whose yard the electrical pole resides in and which the phone lines are run through, had weed eat our internet line. So we have been getting only half of what we paid for, and with the recent weather it had worn down to where it was constantly losing connection.

The first zombie I encountered ensured me it was a network issue that could be fixed where they sat. I waited and waited. The internet going off and on throughout our conversation. Eventually either the zombie lost connection or they got tired of dealing with me because we were disconnected after over an hour of not being helped at all.

The next zombie was positive that my issue was with my modem. It needed to be replaced with the newest version. Fast forward to the arrival of the new modem, and low and behold... It's the exact same model.

The next zombie was of some help. They actually managed to get a tech guy out to my house. That went great as mentioned above he had found where our problem was and ran a temporary line to the house and promise someone would be out soon to bury it.

A week later, same crappy issues and now with a trip hazard (not something you want when a klutz and her klutzlings are constantly having to walk by) laid out across my walkway, I contact yet another zombie.

I am promised a tech will call in 5- 10 minutes. 24 hours later, I'm back on the line with yet another zombie.

By this time I'm breathing fire. Zombies hate fire. They also hate being told you are taking your business elsewhere. I am told that a mistake had happened and my dig guy had not been scheduled. I'm sure the zombie saw the explosion from across the ocean because they assured me that it would be fixed. Today.

I assured them that if it wasn't, I was done with them.

Now, most would say, one bad experience with a company doesn't make a bad company. I agree.

This is not my first bad experience with them. When I first signed up, they signed me up for a phone line I did not want and told them several times that I did not want it. They installed it anyway. Then I had to pay an installation fee for it. Then it took two months of me calling and chewing them out that I never wanted it to begin with before the braindead numbskulls finally removed it from my account. I still was forced to pay the bill that I had the service for those two months. So you see, it's not just a one-time thing.

As promised, if this is not promptly taken care of, I will be removing myself from their customer list.

I write this now to warn others. If you can help it, don't choose AT&T. Unfortunately, at the time there were no other internet providers in our area. Thankfully now we have other options open to us and I've made AT&T aware I will not put up with this crap any longer!

Hopefully, my next post will be of happiness and rainbows and unicorns... but today I'm signing off angry dragon of fire and destruction.

Update: They sent a tech guy not a dig guy so I am still having problems... Tech guys has sworn to me he will personally call the dig guy and try to get this line buried immediately. I'll keep you updated on tomorrow's tech adventure, but for now I have a headache and a deep desire to drown myself in wine...

Update 2/1/19: The dig guy finally arrived and took a whole 30 minutes to bury a line. Then shortly after my tech guy showed up to attach it to the house. As of today I should have a strong, stable connection just in time for my kids four day weekend in which we plan to have at least one stream day! It will be a perfect time to test out the internet connection. They also have assured me that because of all the horrible customer service my bill's will be forever reduced. Must have been the threats to dump them and go with the new fiber company in town. Depending on my service from here on, that may still be the direction we are headed. We only have a few months left on this contract and we can freely switch if need be. Fingers crossed I don't have any more issues out of AT&T.
Posted by AMcBay at 11:01 AM No comments:

As I have mentioned a few times here now, I'm looking into becoming a streamer.

Sounds fun right? Sit in front of a screen and do what you love for the entertainment of others. A dream come true, right? Bahahaha! NO!


I am a super shy, super awkward little person, and going on stream really makes that good ol' anxiety monster squirm. See, she doesn't like to be put in the spotlight. She would rather hide in her dark den and growl and snarl at all those who attempt to disrupt her solitude... including her own family at times.


This is one of many reasons I have taken up streaming. I'm there to talk to an audience. Now, I'm not so bad as Mia Thermopolis in Princess Diaries. I don't get sick from being "on stage" so to speak. But while I'm on stream my nerves are stressed, my anxiety spikes, and it often leaves me exhausted and sore thanks to the Fibro. Doesn't mean I'm going to give up though. I hope to one day be able to create great entertainment that people love. Like my art, my writing, and all my other creative activities, I like to make people happy.

Right now I am working towards Twitch Affiliate. You get more perks than the average member, including subs and bits which can earn you money. After that, I would like to try for partner. Push myself as far as I can. Build a community and hopefully make some new friends, all the while doing things that I love like art, writing and of course gaming.

But I need help and support.

I need followers, I need people to come to my channel and chat with me and the other viewers, and I really need everyone behind me pushing me to keep at it, and not give up just because I'm scared.

So if you have a chance to stop into Araili's Den, please do! Come say hi, ask me questions, create an account and give me a follow. It will alert you when I go live! I also have a Discord that will be an official hangout for all those who wish to follow.

Hopefully, after the internet is fixed (insert internet provider drama here) and I can get back to streaming more regularly, I can set up a schedule so you can catch your favorite streams. Until then you can check out my channel, discord, and twitter to stay up to date on my streaming activities!

Posted by AMcBay at 9:46 AM No comments: