A Fellowship of Friends 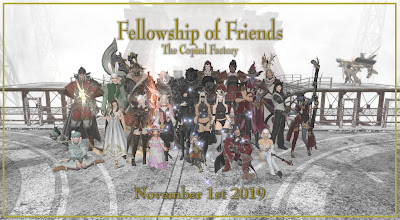 Many know by now my love of the MMORPG Final Fantasy XIV. I've been blogging a bit more about it this year as I am bringing my gaming, art, and writing all into one space.

For a long time in my FFXIV experience, I was a part of a large FC (guild) and I helped to run it with a council of friends and the leader of the FC. Over the summer, however, things came to light of how horrible our leader was treating others and manipulating us. So after an exodus of over a hundred people, a ton of drama, and being called every sour name this "leader's" small mind could utter, we created our own community. While we held no animosity for those that chose to stay, many of us just could not follow or trust this leader and needed to find happiness our own way.

It was a hard few months while we managed the turmoil our leaving had caused not only to us but those that stayed behind. Our FC had been close. The friends I made being so dear to me I called them brothers and sisters. Now those that left were called traitor by our ex-leader because we chose not to follow their dictatorship, and the lies they spread about us took a toll on us all. Our hearts broke and many of us suffered anxiety and depression after the split. We did the best we could to support each other through those strenuous days.

To most this was just a game, but the relationships forged in this game world are so very real.

After we set out on our own many of us went into other FC's or made our own. But we had a discord connecting us and an in-game linkshell. We started running player made events together, having parties, Halloween events, running treasure hunting parties, doing daily content, and even playing other games together. See, though we had split into many factions, our bond was stronger than ever!

Then during a live letter stream, it was announced that a new feature of the game would be available. Fellowships! It was like Yoshi-P heard our troubles and gave us a tool to help us through.

This feature allowed us to plan events through posting on a board within the game. All of our friends' FC's could be added to keep track of all the amazing stuff we were doing together. Thus, The Fellowship of Friends was made!

With the latest 5.1 update we were also given a new raid that was a collaboration with Nier. The first Friday after the new raid dropped our Fellowship gathered for the new 24 man raid and filled EVERY position! Not only that but we cleared it in under an hour and with only one wipe (where you fail a boss battle and must start that battle once more). 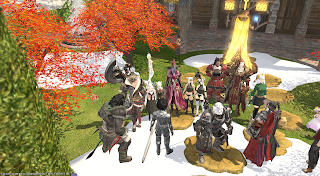 The pride we all felt had us giddy and giggly. We had a blast storming The Copied Factory together and even stuck around for commemorative screenshots after. 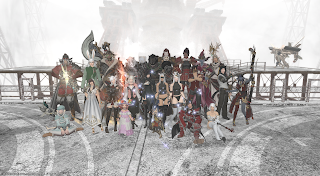 This post is not to dredge up months old drama in any way. This post is a celebration. This post is about the pride I have in my friends and how much I love them! People ask me why I enjoy this game so much. It's for times like these! When you and your friends overcome all the obstacles put before you to create something amazing and have the best of times together.

I couldn't share my adventures with any better people!

If you play Final Fantasy XIV feel free to stop in and say Hi! My game name is Aralina Arai'li from Midgardsormr. Interested in checking out FFXIV for yourself? Play for free today! If you need any help with set up, send me an email. I'd be happy to assist!
Fellowship FFXIV Friends fun game Gaming help